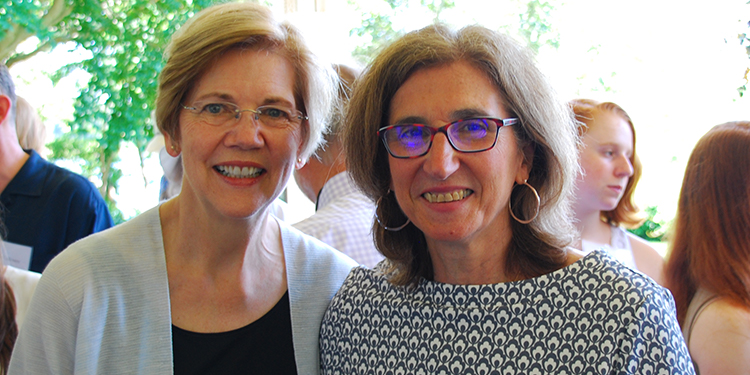 Senator Elizabeth Warren expressed her support for Friedman by saying, “Our Commonwealth and our country need legislators who will fight for working families at every level of government, so I am very pleased to endorse Cindy Friedman for the State Senate in the July 25th Special Election.”

“Cindy understands how we build a future for the people of Massachusetts,” the Senator continued. “She will lead on important issues such as affordable health care, a living wage, transportation, and an education system that supports every child. Massachusetts needs strong voices at home who will stand up against the policies pushed by the Trump Administration. Cindy will be that voice for the 4th Middlesex District.”

In an email statement to the Friedman campaign, Congresswoman Katherine Clark said, “I am proud to support Cindy Friedman, a champion for working families, in her campaign for State Senate. Cindy has dedicated her career to making progress on the issues that matter to Massachusetts families, including raising the minimum wage, improving access to quality education for all students, criminal justice reform, and keeping our promises to seniors.”

Clark went on, “Her years of experience in the Senate and unwavering commitment to public service will ensure that the residents of the 4th Middlesex District continue to have a strong voice and an open door on Beacon Hill. I urge you to cast your vote for Cindy Friedman for State Senate in the upcoming special election on Tuesday, July 25th.”

Since the special primary election on June 27th, Friedman has also gained endorsements from several organizations, including the Massachusetts Teachers Association (MTA), the Environmental League of Massachusetts Action Fund, and the Planned Parenthood Advocacy Fund of Massachusetts.

In response, Cindy Friedman said, “I’m honored to receive support from key organizations and members of the Massachusetts delegation. I look forward to joining Senator Warren and Congresswoman Clark in the fight to protect all residents of our Commonwealth in the midst of the Trump administration.”

Friedman contests Green-Rainbow Party candidate Ian Jackson of Arlington in a special general election next Tuesday, July 25th. If elected, Friedman will be the 41st woman in state history to serve in the Massachusetts Senate.