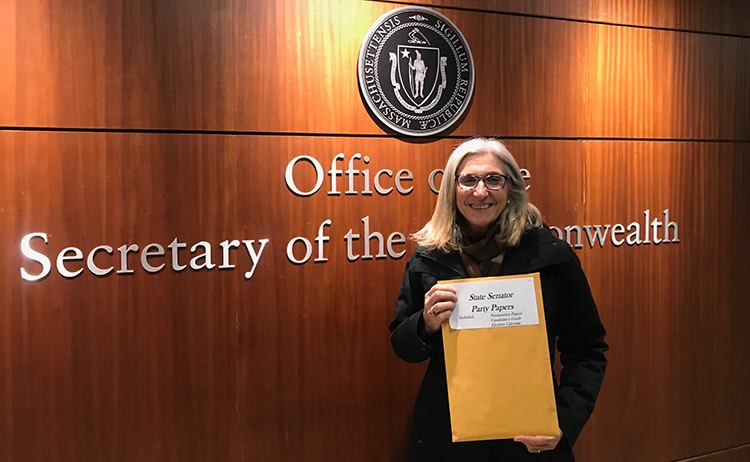 Senator Cindy F. Friedman (D-Arlington) officially announced her bid for reelection to continue representing the 4th Middlesex district in the Massachusetts Senate. Friedman was first elected to the Senate in July of 2017 after winning a special election following the unexpected death of former state Senator Ken Donnelly (D-Arlington).

“It has been an honor and a privilege to represent the 4th Middlesex district, and I could not be more thankful to my constituents for giving me the chance to do this important work,” said Friedman. “Thank you for believing in me, trusting me, and supporting my efforts over the years – your confidence and continued engagement truly energizes my work each day.”

Since becoming state Senator, Friedman has championed several major pieces of legislation. In her first term, Friedman led the effort in the Senate to pass a comprehensive bill to combat the opioid crisis and ensure greater access to appropriate treatment. During that time, she also played an integral role in securing funding to support workforce training for unemployed and underemployed workers in high-demand industries as well as increasing access to jail diversion programs to reduce unnecessary incarceration throughout the Commonwealth.

Most recently, Friedman was instrumental in passing legislation to promote the health and well-being of children in the Commonwealth. She also served as the primary architect of two health care bills that are currently making their way through the legislative process: a bill to bring down the high costs of prescription drugs and another bill to reform the state’s mental health care system.

In addition, Friedman has voted on bills that directly benefit her constituents and the greater Commonwealth, including legislation to increase public education funding, secure a $15 minimum wage for working families, enhance efforts to combat climate change, reform the criminal justice system, promote civics education in public schools, and expand benefits and increase access to services for veterans. She has also supported efforts to protect workers’ rights and improve working conditions as well as fight for women’s health and reproductive freedom.

Friedman has also continually advocated for and secured increased funding levels for public education and local aid in each community in the 4th Middlesex district during her 3 years in the Senate. In addition, she has successfully secured state funding to support local organizations, programs and services in the annual state budget, as well as bond authorizations to support road and infrastructure projects, facility repairs, and environmental protection projects throughout the district.

“We’ve accomplished so much together since I was elected in 2017, but there is still a lot more work to do,” said Friedman. “I would be honored to serve my district again in the Senate and carry on my mission to improve the lives of those most vulnerable in our state.”

The 4th Middlesex district includes Arlington, Billerica, Burlington, Woburn and precincts 1-2 and 4-7 in Lexington. The Primary Election is on Tuesday, September 1, 2020.